Punjabi Rajma Masala, is a creamy curry made with kidney beans and whole spices is a classic in North Indian cuisine.

Today’s post is a guide to make the Rajma masala easily at home, with minimum ingredients that are available in the Indian kitchen and without any special cooking skills. With this recipe, even an amateur will not go wrong.

What is Punjabi Rajma Masala?

Rajma is the Hindi name for Kidney beans. Though rajma is a popular bean in India, it did not originate in India. Surprising, isn’t it? The origin of Rajma is Mexico, it was introduced to the Indian subcontinent by the Portuguese.

But this Indian dish is very different from the Mexican preparation. Punjabis created the rajma masala by adding basic Indian ingredients which is now popular around the world.

For Punjabis, a get-together or weekend is incomplete without having a plate full of Rajma Chawal. It wont be wrong to say that rajma chawal is a staple food for them.

However, in the North, the dish and beans are known as Rajma.

Apart from chole and dal makhani, rajma is also the most popular vegetarian dish in North Indian main course. But now it is popular and loved across the globe.

Like any other Indian dish, each house has its own recipe. While most of them are common in terms of ingredients, there is a slight variation here and there.

This Punjabi rajma masala recipe is a traditional way and most common in North Indian homes or dhabas.

In this easy recipe, soaked rajma is pressure-cooked first and later added to a base gravy of onion, tomatoes, and few basic spices. I do not use readymade Rajma Masala powder/spice mix but still the curry tastes delicious just like any dhaba or restaurant.

Well, you can make this recipe a one-pot meal. Prepare the masala first, add the soaked rajma, and pressure cook till done. I have tried this way and the result is inconsistent. Because of acidic tomatoes, the cooking process of beans takes a longer time. So, I do not prefer this way.

While there are a lot of recipes for this famous Punjabi Rajma masala, this homemade recipe will give you a restaurant-style thick, melt-in-the-mouth texture, a flavorful and aromatic dish that you can enjoy with basmati rice, jeera rice, plain parathas, roti, or naan. It is also rich and creamy but without using any cream.

Why is Rajma Chawal so popular in North?

Punjab is the origin of rajma chawal. Probably this is second on the list of comfort foods after dal bhaat/chawal.

This combination is a complete meal in itself. This means you do not need to worry about cooking a side dish (dal or any other vegetable).

Rajma chawal is a dish that one can eat on the go. If you are in hurry and also hungry, you do not need to depend on fast food. In fact, this dish takes lesser time than fast food and is nutritious, wholesome, and delicious.

Nothing can beat a plate of North Indian style Rajma Chawal served along with green chutney, raita, sirca pyaaz/pickled onions, and papad.

The most important reason, it’s tasty. Rice is completely covered with thick rajma gravy, the rice grains absorb all the flavors from the tangy and mildly spiced onion-tomato gravy.

The taste of rajma is based on the making process. My step-by-step instructions will help to get the best rajma masala taste ever.

*Cooking at home is effortless

*Can be made vegan

*Rajma and chawal/rice is a complete protein

In the market, there are different types of rajma are available depending on size and color. They are;

Red Rajma/Red Kidney beans: These are dark red color in color and available in small as well as big sizes. Red rajma holds its shape even after its cooked.

Kashmiri Rajma: Also, called Jammu Rajma. They are red in color and small in size. This variety is extremely popular in areas around the Himalayas.

Chitra Rajma: This variety is big in size, light brown, and white in color. Because of the color, these look beautiful. The texture of Chitra rajma is softer than red rajma. Also, starch content is more than red rajma.

The best part of this Punjabi rajma masala recipe is, the ingredients are minimal and easily available in the Indian pantry.

Rajma/Kidney beans: You can use either Chitra or Red rajma. If these are not available, you can also use canned beans. It also reduces the cooking time.

Onions: Finely chop the onion for the smooth texture of the gravy. You can also grind the onion to smooth paste.

Tomatoes: The number of tomatoes will be more than onions for the perfect tangy taste and the right consistency of the gravy.

Ginger-garlic paste: I prefer to use fresh ginger garlic paste. But, you can use ready-made or store-bought instead.

Oil: Dhabas use mustard oil for authentic taste. You can use any vegetable oil. I use oil to cook the masala and also add ghee at the end.

Wash and soak the rajma in enough water for 6-8 hours. Discard the water and rinse them thoroughly to get rid of any bad smell (especially during summer or soaking for more time)

Next, add ginger garlic paste and saute till the raw smell goes away.

Now add tomato and coriander stems puree and give a good mix. On medium flame, saute for 10-15 minutes till oil separates. If the masala sticks to the bottom, add little water and continue to bhuno the masala.

Add cooked rajma along with water and give a good mix. Next, sugar, chat masala and add garam masala powder. Mix well, cover the pan, turn the flame to low, and simmer for 15-20 minutes.

The most important tip to make the best Punjabi Rajma masala is to put lots of love and patience while cooking the onion-tomato masala.

Soaking the beans: Soak the beans for 6-8 hours or overnight. Soaking reduces the time to cook the beans and also helps in easy digestion.

Pressure cooking rajma: Always pressure cook rajma till soft and mash easily. If the beans are not cooked properly, it may upset the stomach and lead to indigestion.

Cooking time can be 5-10 whistles, as it depends on the water density (hardness or softness of the water) in your area.

Onions: Finely chop the onions and saute till they turn brown in color. By doing so, the onion will turn into a paste. Else, you will get pieces of onion in the gravy.

You can either grate or grind the onion, it will take a little more time to cook for the raw smell to go away.

Tomatoes: It is a key ingredient to make Rajma masala. Tomatoes should be sour. So, use local tomatoes which are usually round in shape. So, either grind or grate or use readymade tomato puree.

Cook onion-tomato masala for a longer time: After adding the tomato puree, cook for the masala well before adding the cooked rajma. I cook for a good 10-15 minutes, it may seem a long time but trust me, it’s important for best taste.

Simmer the gravy on low heat: After adding the cooked beans along with water to the masala. Cover the pan and simmer on low heat for 15-20 minutes. This helps in kidney beans absorbing the flavors and the curry gets a creamy texture.

Mash rajma: Mash some of the kidney beans with the back of the spoon or can you a potato masher. The starch in the rajma helps to thicken the gravy.

Another way is to blend 2-3tbspn cooked rajma to smooth paste. Add it to the gravy before simmering.

Ghee tempering/tadka at the end: I always add ghee and hing tempering at the end. Ghee adds aroma and hing helps in digesting.

I usually follow this when it is a pot-luck in the office. You can follow the same for any get-together or party or celebrations. Cook a day ahead, cool completely and let it sit in the fridge. Serve your guests the best Rajma masala.

Whenever I make Rajma masala, it is in large quantities. So, that I can enjoy leftover next day too.

Let the curry cool completely and refrigerate in an air-tight container for 2-3 days. Take out the container and let it rest for 2-3 hours before eating. Reheat until warm.

If you want to impress your guests or make a weekend special meal, try this Punjabi Rajma masala recipe, and do let me know your feedback. You can also follow me on Instagram to see what’s latest in my kitchen!

Soaking and cooking the Rajma

Soak the rajma for at least 8-10 hours before cooking them. Pressure cook till they are tender, slightly mushy but hold the shape. You can also use canned kidney beans. Do not discard the water, use it in the gravy. Readymade rajma masala is not necessary. Basic Indian ingredients are enough to make this dish delicious. Cook the onion-tomato masala well for the best taste. Mash a few rajma to thicken the gravy. Do not skip ghee tempering, it elevates the taste a lot. You can add pinch of kasuri methi powder at the end.

Can I make this curry without Onion and Garlic?

Yes, you can. Heat oil in a pan, add whole spices – bay leaf, black cardamom, and cumin seeds. Let them crackle.
Turn the flame to low and add tomato puree. Cook on medium flame till oil separates.
Add salt, dry spices, and little water. Cook for 1-2 minutes.
Add the cooked rajma along with water and simmer for 10-15 minutes. Add a pinch of sugar and garam masala powder and give a good mix.
Next, add the ghee tempering.

Yes. Kidney beans are a powerhouse of nutrients. The incredible benefits of rajma are;
1. Rajma has a high quality of plant protein.
2. Amino acids in Rajma helps the information of better muscle fibers and improve the function of the muscles.
3. Has a low glycemic index. So, it is ideal for diabetics as well.
4. Is a good source of Soluble Fiber.
5. Contains Calcium and Manganese that help in strengthening bones.
6. Because of protein and fiber, it is good for weight loss when had in limits.

How to make Rajma curry thick?

There are a few tips that you can follow to make curry thick.

1. Finely chop the onions and saute till light brown color. Later when the onions cook in gravy, it almost turns into a paste.

2. Use tomato puree. It helps to thicken the gravy and texture is best.

Yes. The combination of Rajma and Chawal is a rich source of protein, carbohydrates, fibers, and many minerals and vitamins.

Can I freeze Rajma masala?

Yes, you can.
Cool the curry completely and freeze in a freezer-safe box for up to 2 months. Suggest you freeze in small portions.
Thaw it for 1-2 hours before eating.

What if I forgot to soak Rajma overnight?

You can follow quick soak method.
Take a wide and deep pot. Add water, on high heat let the water boil. Turn off the flame and add washed beans. Cover the pot and let the beans sit in hot water for 1-2 hours. It will be same as rajma soaked overnight.
Then while pressure cooking rajma, add a pinch of soda.

Can I add cooking soda in Rajma curry?

Yes, you can. Add a pinch while cooking the rajma, it reduces the cooking time.
If you are using fresh beans and soaked them for 8 hours, you don’t need to cooking soda.

Cook With San is all about making “Everyday Yummylicious”  with easy, quick, and restaurant-style recipes.

Know more about me 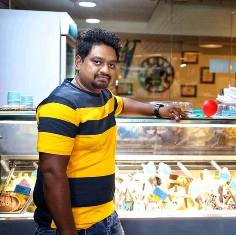 Hello, I’m Santosh. The cook and photographer behind Cook With San. I started this blog so that you can make “Everyday Yummylicious”  with easy, quick and restaurant style recipes. Know more about me….